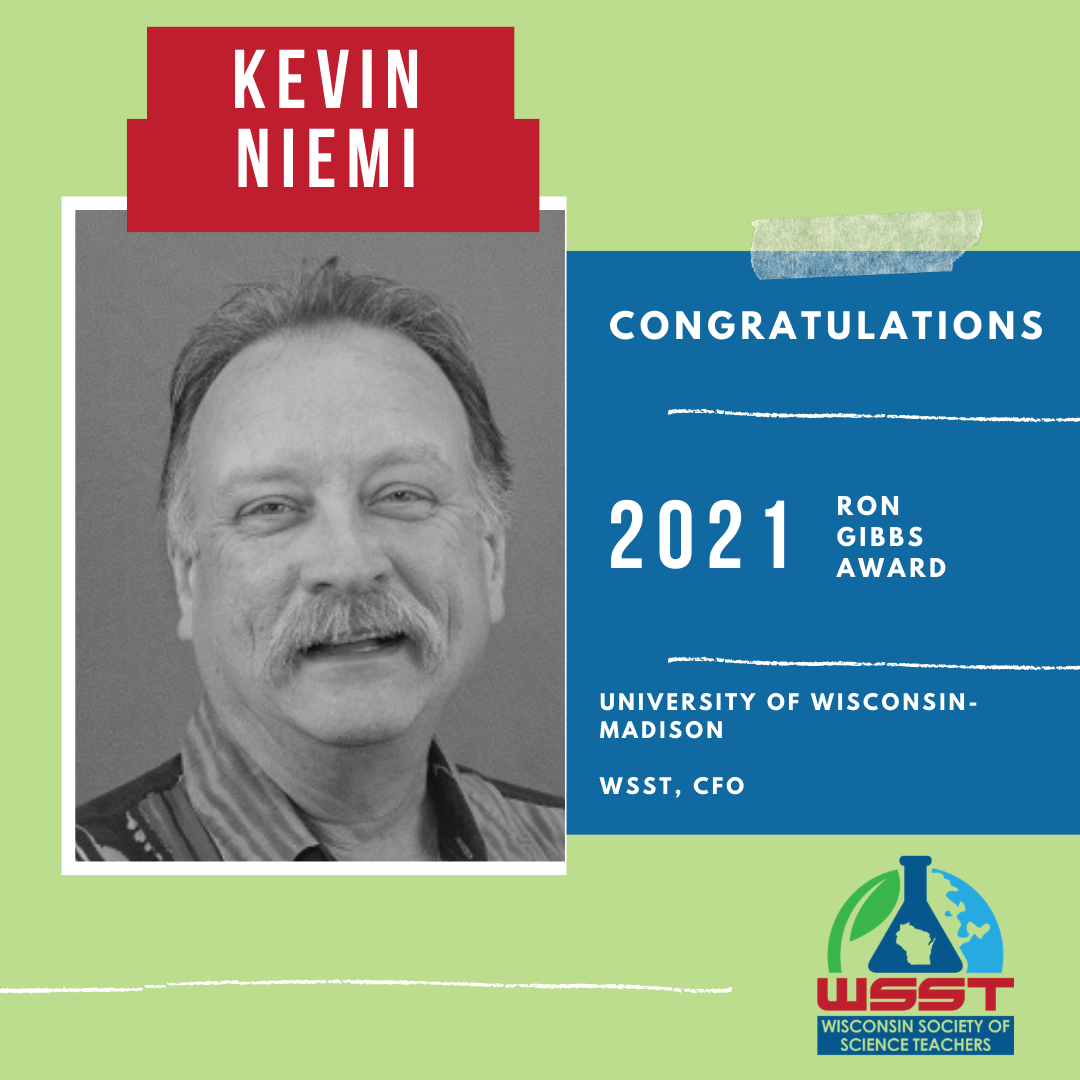 Cambridge, WI, March 11 – Dr. Kevin Niemi was recently recognized by the Wisconsin Society of Science Teachers (WSST) for his outstanding life-long work with Science Education in Wisconsin. WSST recognizes teachers of science annually for their achievements. The Ron Gibbs Award is given to honor a person who has made outstanding contributions in science education over a long and distinguished career in Wisconsin. The award consists of a plaque and a lifetime membership to the WSST. This is WSST’s most prestigious award.

Niemi has been involved in the science education community for twenty-five years, sharing his expertise and offering professional programs for teachers of science. Heavily involved in WSST, Niemi has helped to advance the field of science education at the state, national and international levels. Throughout his career, Niemi has worked as a scientist, researcher, and science educator, with the bulk of his work aimed at improving the teaching and learning of science. Over the years, he has always focused on this. Michelle Griffin-Wenzel, who was inspired by Niemi to become more involved in WSST, writes that she “can’t even begin to imagine how many people have participated in one of Kevin’s sessions and have been inspired by his passion for science and science education.” Ray Scolavino, who also benefited from working together with Niemi in WSST, writes about Niemi’s outstanding leadership qualities, including his ability to make others feel heard, to inspire them, and his willingness to “fulfill their visions.” Current WSST president Matt Lindsey also describes how Niemi’s guidance and tutelage has benefited WSST and thus improved the state of science education in Wisconsin. Lindsey credits Niemi for not only advancing science education in the state, but notes that he “also works tirelessly to advance science education nationally.”

“I can’t even begin to imagine how many people have participated in one of Kevin’s sessions and have been inspired by his passion for science and science education.”

Niemi’s professional career began at the state level and progressed to regional, national, and international activities. He has made numerous presentations at these levels, published extensively, and secured millions of dollars in grants for working with the science community. He has worked as a consultant, outreach director, professor, and more over his illustrious career. With regard to WSST, he has been a member 25 years, serving in various roles including president and CFO. Niemi’s career has come full circle from a scientist learning from teachers to now giving back to the scientific community.

In addition to winning this award, Niemi has also received the UW-Madison Chancellor’s award for Community Support (2002), the Fulbright Senior Specialist Award (2007), and the AAS Science Books and Films Best book of 2014 award. He has additionally received the honors of being a NAEP Achievement Levels-Setting Panelist (2010), and being an appointed member of the Wisconsin Department of Public Instruction Superintendent’s Science Leadership Team (2011). Nieimi has also earned many other honors and grants over his professional career. WSST once again congratulates and thanks Kevin Niemi for all his contributions to science education in Wisconsin.

Wisconsin Society of Science Teachers (WSST) is the largest membership organization in Wisconsin focused on the advancement of science education since 1958. They have a mission of promoting, supporting, and improving science education in the state of Wisconsin by providing leadership, advocacy and programs to enhance the teaching and learning of science. The Awards and Recognition committee is responsible for providing recognition of noteworthy accomplishments by WSST members which support the goals of WSST.